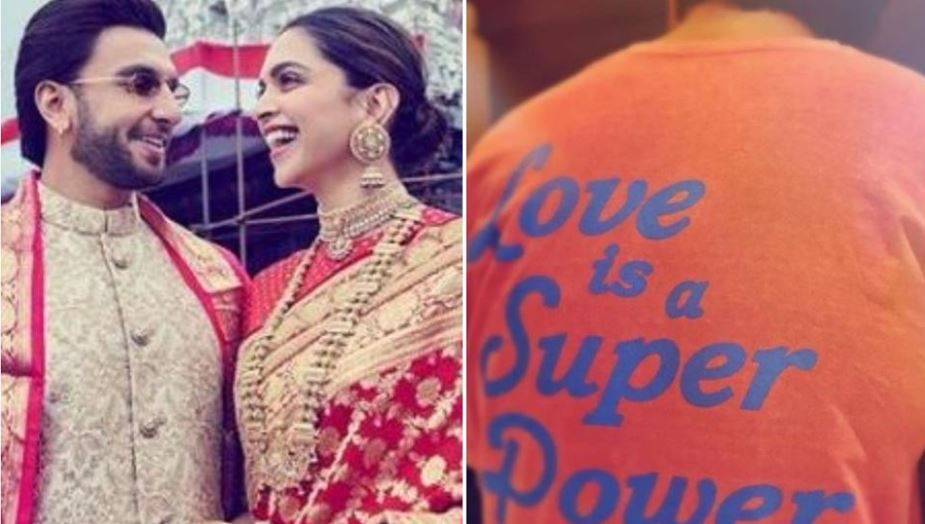 Agency- Bollywood Actor Deepika Padukone has posted a new picture of her husband Ranveer Singh with an empowering message on love. Her caption on what Ranveer means to her will gladden your heart even more.

Sharing a picture of Ranveer, Deepika wrote: “& you…my super drug!” In the picture, Ranveer can be seen sitting with his back to the camera. On his t-shirt are written the following lines — ‘love is a super power’. Ranveer and Deepika celebrated their first wedding anniversary on November 14 and marked the occasion with visits to Tirupati temple in Andhra Pradesh and later, on November 15, with a visit to the Golden Temple in Amritsar. Accompanying them were their respective families.

On their respective work fronts, Ranveer has been busy, first with a tough training schedule and later with the shoot of his upcoming film with Kabir Khan, ’83. The team of the film left for England towards May-end and stayed put there on a start-to-finish shooting schedule, only to return in August-end. The first look of Ranveer’s character was unveiled on his birthday in July. Ranveer will be seen playing former Indian cricket Kapil Dev, while Deepika will be seen in a supporting role as Kapil’s wife, Romi. The film is based on India’s unexpected victory at the 1983 cricket World Cup, beating the indomitable West Indies.

Father of Ajay Devgan has passed away

These actors can’t vote in Lok Sabha Election 2019, why?